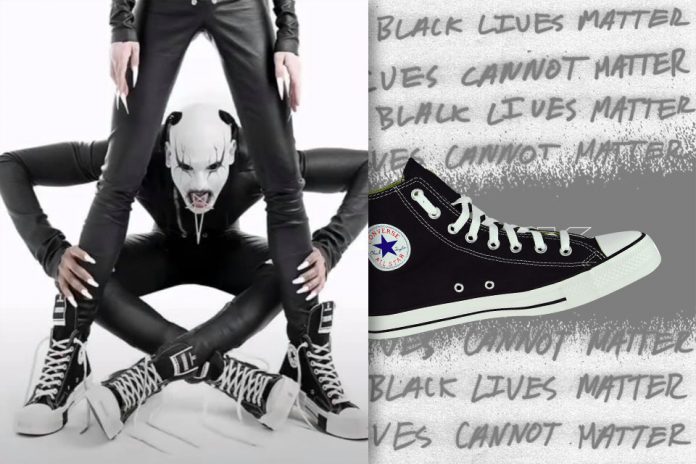 In July 2021, Converse shoes “breaks from convention” with the TURBODRK Chuck 70, created by Rick Owens. Many record him as an “icon,” but of course, the Bible calls it wickedness.

The design element included the pentagram, a devil symbol. The Converse ad made use of “dark imagery” that clearly channels Satan and his demons.

In March 2021, Rapper Lil Nas X (Montero Lamar Hill) launched a limited edition Nike, designed for “devil fans.” The Satan sneaker had no association with the parent company, and Nike sued MSCHF, which designed the shoes.

Although Nike claims it did not endorse the devilish design. Nonetheless, the company is known for its woke ads, supporting leftist politics.

Pinterest permanently suspended pro-life news site Live Action from their platform in June 2019, saying, “We don’t allow harmful misinformation.” The pro-life organization Live Action has openly said that “abortion is the only ‘medical procedure’ that aims for a 100% death rate.

Leading pro-life website LifeSite News was banned from Apple News in July 2019 because they claimed the site “shows intolerance towards a specific group.” LifeSite News, a pro-life site, says it covers “life, faith, and family news.”

Apple announced a week later it would reverse the ban. The “woke company” rolled out more diverse same-sex couple emojis with 75 combinations the next month.

In November 2014, a video of a woman was posted on YouTube explaining why she thinks the Monster drink is demonic. She related its design to satanic elements such as 666. The logo “M” represents Vav, the Hebrew numeral for six.

Interestingly, Monster’s tagline is “Unleash the Beast.” Naturally, the woman related it to the beast referred to in the Book of Revelations. To date, it’s the second most popular energy drink.

RELATED BLOGS:
Satan is out & open in Hollywood.
Why gender ideology is Luciferian.