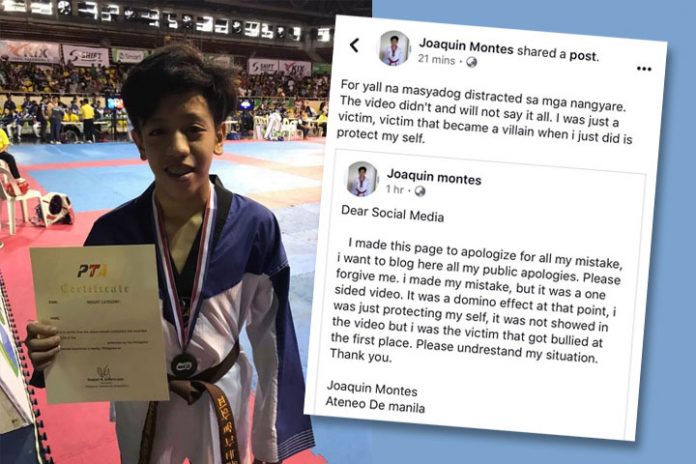 The most hated bully in the Philippines

Joaquin Montes dubbed as ”Bully Atenista’ (Ateneo De Manila University moniker) made headlines after a video showing him bullying a schoolmate went viral. He claimed it was self-defense. What’s unique about Joaquin is his very short height with a brazen attitude. Although Montes posted an apology in his Facebook, his rhetoric is seen as ‘victimhood’ and with little remorse. Ateneo is considered one of the top Universities in the Philippines.

His dad posted a message defending his son’s action made things worse. It prompted a veteran army to challenge him in a video. “I blame the parents for that,” Joseph Otazu said. In other videos, it shows a brave Joaquin who knows Taekwondo hitting another boy much taller than him. A week after the incident, Diego, his older brother was rumored to have been flogged.

He is so hated by many Filipino netizens that more than a hundred fake Facebook accounts were created in his name to spite him. Recently, allegations that he is involved in drugs is making rounds. True or not, news about Joaquin is so bad that some politicians have intervened.

→ Nett Gochuico, bullied by his dad became a bully himself.

Why do people bully?

Some men are insecure about their height and can trigger a certain attitude to compensate, or was Montes’ brusque and belligerent attitude a result of bad parenting?

Aggressive behavior
In an Anti-bullying survey, the study indicated people who have an aggressive behavior have experienced stress or trauma as a child. Bullying is a subcategory of aggressive behavior and having such increases self-esteem. Bullies are characterized by being antisocial or having a tendency to manipulate or control others. It is important to differentiate between two types of bullies:

→ Seven Biblical lessons for kids to have high grades.
→ Gifts you should never give  to kids below 12 years.

What does God expect from parents?

I struggled with one of my child whose constant whining and hurtful words pierced my heart many times. With all my knowledge in child rearing, I had no answers. Then, God impressed three things that also applies to every parent:

A father should lead by example

Children should not see aggressive behavior at home. Fathers should never throw things, shout, or cuss. Dads should be seen as the ‘defender’ not only of the children but of the mother as well. Likewise, a mother who constantly nags at home or is a control-freak may cause lifelong psychological damage, according to a study. [Independent UK]

Remember, for kids to have a good character, we must demonstrate we have it or most of it. If your child has deep insecurity, affirmation is critical, but only God’s love can heal all insecurities.

For our kids to have a good character, we must first demonstrate we have it.

UPDATE: Montes expelled by the University

Ateneo De Manila University released a final statement on the incident. After a thorough investigation and listening to all parties involved, ADMU imposed the penalty of ‘dismissal’ to Joaquin Montes on December 23, 2018. This means Montes can no longer come back to the school, the memo said.

Montes and her mom appeared on GMA TV on January 9, 2019, to apologize. The young man had no remorse, the host insinuated. His mom’s apology was insincere and defensive, said most of the YouTube netizens. With Joaquin’s Dad similar stance on the issue, it will be difficult for the family to move on without being bullied as well online.