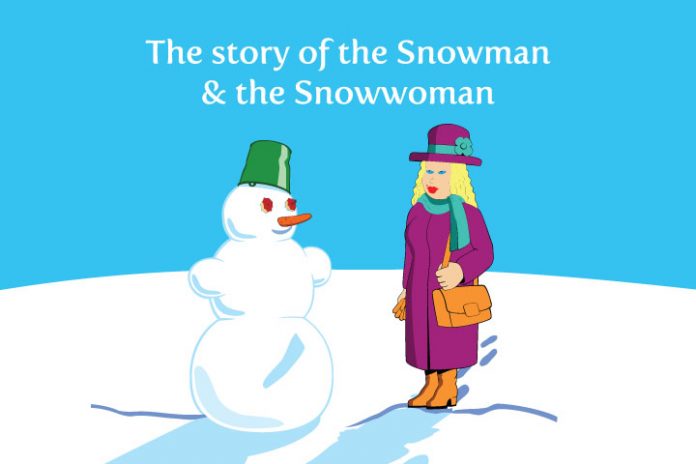 It snowed last night and there were snowflakes

Hooray! it snowed all night and by the next morning, my kids and I made a snowman. A woman in our neighbor passed by and asked why I didn’t make a snowwoman?

So, I made a snowwoman too!

A feminist neighbor soon complained about the snowwoman’s “voluptuous chest” saying it unfairly objectified and victimized snowwomen everywhere. She also demanded that we remove the snowwoman’s broomstick because it depicted women in an inferior domestic-only-role.

A gay couple living nearby threw a hissy fit and groaned because it should have been two snowmen instead. I said politely, please respect my tradition, yet they left calling me a homophobe.

Hearing the gay couple, their transgender person friend demanded that the body parts should be detachable and interchangeable, it’s the law.

The vegans at the end of the lane complained about the carrot nose, as veggies are food and not to decorate snow figures with. This is a waste considering the millions of hungry people. But more importantly, plants have feelings too and this degrades their value.

By now the whole neighborhood got involved because the ‘snow couple’ was white, they called me a racist. When I said “But snowmen have always been white,” they threw snowballs at me and called me a Neo-Nazi!

Then march the middle eastern men who were new in the neighborhood. They demanded that the snowwoman be covered up immediately because ‘Sharia Law’ demands it!

Finally, the police arrived. Someone called 911 and complained that I was causing the disturbance and was repeatedly offending people. The council equality officer charged me with infractions and threatened me with eviction.

Child labor services also showed up accusing me of running a sweatshop where minors are forced to work outside, in an inhumane freezing condition, with no pay or benefits. The children were taken away pending an investigation.

A local TV network arrives and a reporter asked if I know the difference between snowmen and snowwomen? I tried to explain the whole ruckus, but I was cut short because of ‘bad signal’.

This is how the story ends

I came out in the news that night and was referred to as a ‘sexist- male-chauvinists pig’. Other networks referred to me as a suspected terrorist, racist, and gender sensibility offender bent on stirring trouble during the hazards of inclement weather.

I was fired from my job and now in jail awaiting trial because I built a snowman out of snowflakes.

Moral of the story

There is NO moral of the story! Unfortunately, this is what our world has become and it started with snowflakes. Though there are lessons we can learn from this parable.

→ Lessons from The Snowman and the Snowflakes.

This article was posted as a comment in 2017. This version is from Jhonny Crumpton, which we edited and adapted into an allegory. Pun intended.