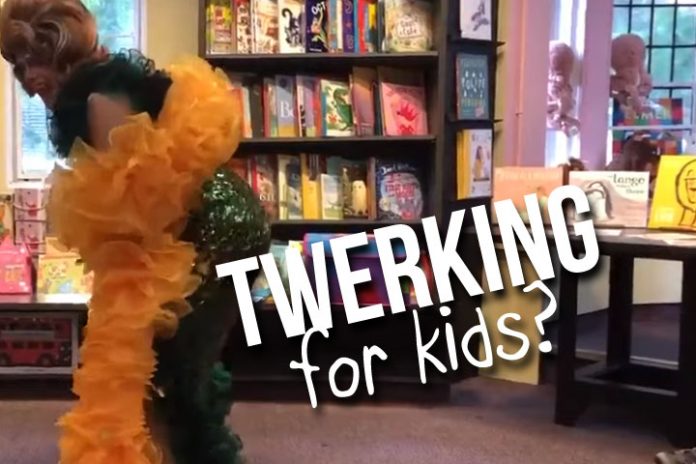 History of the DQSH

Drag Queen Story Hour (DQSH) or Drag Queen Storytime is a children’s event that was first organized in 2015 by author and activist Michelle Tea. It was held in San Francisco to “inspire a love of reading while teaching deeper lessons on diversity, self-love, and an appreciation of others.”[1]

These Drag Queens read LGBTQ books to “educate” kids about diversity. In truth, they are teaching that being transgender and “same-sex parents” have moral value. Recently, they introduced the Drag Queen Alphabet.

This kind of “Free thinking” endangers a conservative christian culture, to which atheists of course laugh. What they need to realize is God’s judgment is coming.

A Drag Queen demonstrates “twerking” to young children. Twerking is a lascivious act of “sexual intercourse,” made into an amusing dance move. Miley Cyrus made twerking famous in 2013.

Recently, Netflix faced flak for promoting the series “Cuties,” which is a story about eleven years old twerking and involved in a sex ring.

→ What is wrong with twerking?

Drag Queen Kitty Demure from California speaks out against moms who want to bring their kids to DQSH events. Kitty said three important points that are spot-on:

1. What the hell has a drag queen done?

“What in the hell has a drag queen ever done to make you have so much respect for them, and admire them so much, other than put on make-up and jump on the floor and writhe around and do sexual things on stage?

2. Why would you want them to influence your child?

3. Drag Queens performs for adults with a lot of filth

“A drag queen performs in a night club for adults,” he goes on. “There is a lot of filth that goes on, a lot of sexual stuff that goes on, and backstage, there’s a lot of nudity, sex, and drugs. Ok? So, I don’t think that this is an avenue you would want your child to explore.”

Transgender Drags performs for adults with a lot of filth