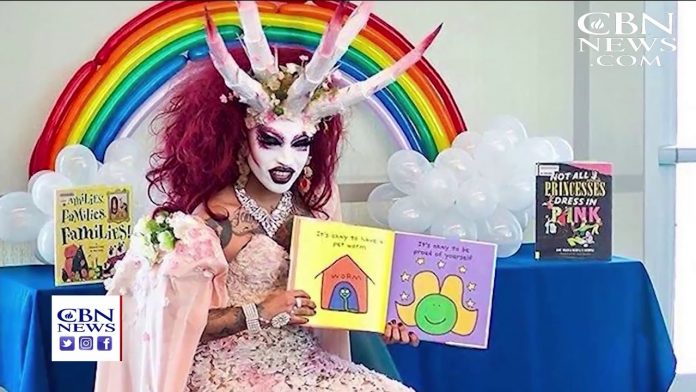 Lucifer claimed equality with God, and he tells us that “#wetoo” should demand equal rights. He calls it diversity, inclusion, equality, and liberal politicians call it progressive.

They support religious freedom unless it’s from the Bible. Even the words “Merry Christmas” offends them. The Bible warns us that people will be lovers of themselves in the last days, holding on to false wisdom. (2 Timothy 3)

→ Save James, mom his boy to be a transgender.

Rights of choosing a bathroom

Male can use a female bathroom and vice versa if they feel like it. This means that even if you are a male sex offender, you can pretend to be gay and use the girl’s bathroom. The law protects them in exercising their choice of a public restroom.

We should use fluid or non-binary pronouns like “they” or “theybies.” The Canadian bill, Bill C-16, allows the replacement of “he or she” to “zie, zieself, zimself, or zirself.” Gender classification should be expanded.

LGTB should be LGTBQ, to actually mean LGBTTTQQIAA. The redefinition of sexes is to confuse everyone into believing that there are more than two sexes.

Student leaders at the University of Oregon wanted to remove a famous Martin Luther King Jr. quote from a wall on its student center because it was not inclusive.

Santa should also be a “black” and “gay” man

Although gays remain a minority, their voices have become louder to push the ‘Gaying of America.’ They now target children by introducing “Drag Queen Story Hour.”

Junk “he & she,” says University students

The University of Tennessee is urging incoming students and teachers to junk references to “he,” “she,” and “them” in favor of gender-neutral “ze” and “xe.” UT wanted to ensure it is not singling out transgender or non-binary students. [Washington Examiner]

Gays were discriminated against and bullied for years for no good reason. Today, some LGBTQ have retaliated. Christians were sued by lesbians, trans people, and gays.

A born male who claims to be a female person can now compete with biologically born girls in school – and they actually win. Most transgender rejects basic science and push for idiotic ideologies that insist they are “biological females.”

The laws passed by democrats ruined the definition of sex. They are empowered, and anyone who disagrees can be liable for a criminal offense. [Heritage]