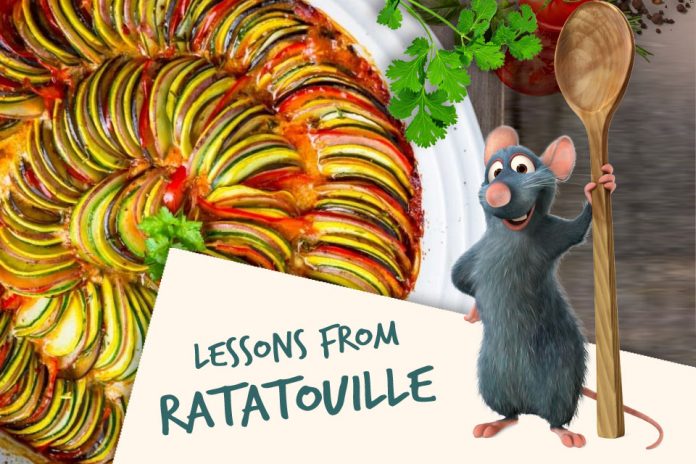 Important values in Ratatouille cartoon, kids can learn in the movie

RATATOUILLE is one of my daughter’s favorite cartoons. She watched it about a dozen times! The story centers on a rat named Remy and Linguini, cook helpers who need each other to fulfill their dreams.

Chef Gusteau inspired Remy, the rat. He was a famous restaurateur who coined “Anyone can cook.” His desire to cook led him to the restaurant where he met Linguini.

The conflict began when everyone thought Linguini cooked the delicious soup. Undermined by the antagonist Chef Skinner, he discovered Linguini was the wold-be-heir of Gusteau’s restaurant. A threat, he tried to expose Linguini and Remy, but it backfires.

Kids can learn several lessons, morals, and even Christian principles from the movie. Other than that, it’s a heartwarming and must-see movie for the family.

At the restaurant, Remy tells his cousin, “we don’t steal food!.” Although he was inconsistent, for example, ravaging ingredients from an old lady, the storyline’s point was decency—ironically from a rat.

Renata was Linguini’s dead mom and Gusteau’s former lover. In a letter she wrote to Chef Skinner, Renata alludes to heaven. Something that’s rarely talked about in movies today.

→ Are my relatives in heaven?

Remy’s cousin is about to eat cheese laced with poison in one scene. Remy sensed it and sprung into action to stop his cousin. He exclaims, “Thank God!” realizing he could control his cousin from eating it.

Today, the mere mention of God in movies or cartoons is taboo in far-left liberal America.

→ Why Paul was always thankful.

After Remy was trashed from the restaurant after their cover blew, his father tried to console him by saying, “we can’t change nature.” But Remy disagrees and says, “We can if we decide.”

In truth, the Bible does say we have sinful nature, but that can change when we come to Christ and become a “new creation.”

After Linguini confessed Remy, a rat, helped him cook, the chefs abandoned him. Linguini was alone to serve the customer, and he didn’t know how to cook. Remy comes to the rescue, together with the rest of his “rat clan.”

In the Bible, washing hands is both a religious ceremony and hygiene among the Jewish people.

→ Cleanliness is next to godliness.

Snooty food critic Ego thrives on destroying restaurants. After tasting Remy’s dish, he’s transformed from inside out. Of course, everything was an allegory, but he realizes his prejudice when he learns about the rat Remy. After all, anyone can cook.

Why should kids watch Ratatouille?

The cartoon movie ends with essential values. In RATATOUILLE, we see the moral value of forgiveness, reconciliation, love, friendship, and the importance of choice.

RECOMMENDED:
Why homeschooling is worth it.

Michael Murray’s ‘Nobody Left Out,’ Best Devotional for Teens

Chanak: How to Train a Child Biblically

If I knew, a poem by Sidney W. Johnston

Biblical Order of a Christian Family

5 Quick Verses to Encourage Kids to Do Household Chores

Powerful Words to Save Your Marriage from Satan’s Grasp

Spirit of anger manifest during a bible study